An Exorcism in Savannah

On East Byron Street sat a home built in 1796 by a man from Rhode Island named Hampton Lillibridge. The house, complete with a Widow’s Walk, looks like it would be right at home in a New England town, not downtown Savannah. 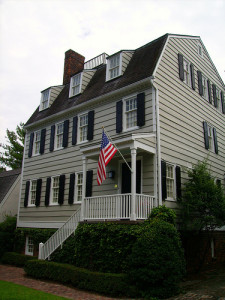 After Mr. Lillibridge died, his wife remarried and sold the home. After a long period of owners passing through and times of vacancy, it was finally bought in 1963 by the famous antiques dealer and preservationist Jim Williams. Jim moved the home to it’s current location on St. Julian Street.

Stories of a paranormal nature about the home still persist. One such tale takes place while the Hampton Lillibridge house sat as a boarding house. A young sailor who lived there decided to commit suicide by placing a rope around his neck and hanging himself in one of the upstairs bedrooms. Although his body has since decayed, his spirit seems to still be present within the structure.

During Jim’s restoration of the Hampton Lillibridge house, the workers were tormented by an unseen force. They reported hearing voices in the house, as well as the unnerving sound of footsteps when no one was there to make them along with the feeling that they were not alone.

One afternoon, Jim and a few of his friends were walking around on the ground floor of the Hampton Lillibridge house to check on the progress of the work. Suddenly, although the house sat empty besides Jim and company, they heard footsteps and voices coming from the level above them. They quickly headed for the stairs. When they arrived to the second floor, they realized that the sounds were now coming from above them yet again. They went all of the way up, straight to the Widow’s Walk, only to hear the footsteps and voices yet again. This time from below them!

Things began to take a dark turn as the harmless sounds became more….sinister. Once, a group of Jim’s friends were at the Hampton Lillibridge house when they began hearing sounds above them once again. Only one man was brave enough to go and investigate the noises. When he didn’t return, the others slowly made their way up searching for the lost man. They found him at the top level of the home, face down on the floor. He was paralyzed with fear, sweating profusely with a wild look in his eyes. This man had experienced something horrible! He claimed when he entered the room it was as though he was submerged into a pool of ice cold water. A strange force overpowered him and he felt he was drawn to the open chimney shaft, which would have been a thirty foot fall. He did the only thing he could think of to avoid certain death – drop to the floor.

Finally, after so many sightings and reported paranormal phenomena, on December 7th, 1963 an exorcism was performed on the Hampton Lillibridge house by the Episcolpal Diocese of Georgia. The exorcism went on for a full 45 minutes, yet within a week the activity began to surface once again. This time with a vengeance. Voices, Footsteps, screams and the feeling of a very malevolent male presence permeated the Hampton Lillibridge house.

Maybe the Hampton Lillibridge is haunted because of the connection to a gruesome discovery that was made before its transport to the homes current location. While preparing the foundation of the Hampton Lillibridge house, workers discovered an old, tabby crypt which was half filled with water. They told Jim that the crypt was empty and they covered it over. Who was in this mysterious tomb?