A Most Spooky Town? Do Tell!

In a town where the unknown and spooky is popular and on point, we find an innocent bed that caused quite a stir. Welcome to Savannah, GA, a seriously haunted town. A town where you can see, hear and feel those who have passed, that is if you’re lucky. There are many encounters to be had here through the Savannah Ghost Tours. You really don’t want to miss out. 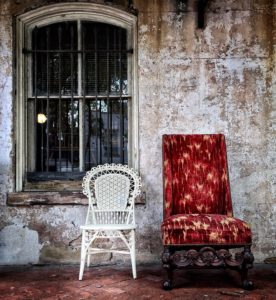 How many times have you been in an antiques shop browsing, looking at furniture? You think “Well, this item is such a good price and furniture was made so much better back then.” True. But have you heard of haunted objects? You haven’t? Oh, please, sit down and relax… I have a story for you. I say, is that a used or antique chair you’ve just sat down on? It is? Oh my… I guess I should perhaps say “y’all sit down now instead… Savannah is full of lovely old and haunted antiques. Seriously, be careful where you sit! You don’t know where these items can be found? We pass by a few places on our Ghost Tours in Savannah that may have some. But be careful, you don’t want to sit on someone’s great uncle!

On To Our Story

Al Cobb is the father of twin boys. In 1998 he purchased an antique bed for one of the twins, Jason. Now Jason was pretty thrilled with his Christmas present up until he went to bed that night. While trying to sleep, Jason sensed someone in the room with him; someone was watching him sleep! As the days went by, stranger occurrences happened. Remembering growing up in a haunted house myself, I sympathize with Jason when his parents told him he was just dreaming. Well, I’m sure that Jason was wishing it had only been dreams. But what Jason described was troubling. You see, something was waking him up at night. It felt like someone was propping their elbows on his pillow and he could feel a cold breath on his neck.

On the fourth day, Jason woke up and saw that a photo of his Grandparents, that was on his nightstand, was shattered. He again went to his parents telling him that something was definitely going on. At that point, his parents did believe him because he would never shatter or harm a photo of his beloved grandparents.

It’s Time To Get Answers 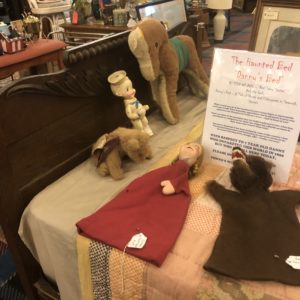 Living in Savannah, and being aware of the local history and exploring and learning from an interest in paranormal activity, Mr. Cook decided to ask some questions of their visitor. He left paper and a pencil in Jason‘s room and asked the spirit his name and what he wanted. Later that day they found that the spirit had written down “Danny 7.” He also had written a note that his mother died in the bed in 1899.

Was this an instance of poltergeist activity or was this just simply a haunted object that a young boy attached himself to in death? That is hard to say because there were two teenage boys living in the house along with a ghost that liked to pull out drawers in the kitchen, stack the dining room chairs on the table and leave notes. One note said that it was his, Danny’s, bed. I’m sure you’ve heard poltergeist activity explained on one of the many Savannah Ghost Tours. No? Let me explain. Basically, a poltergeist is a noisy or unruly ghost that likes to move, stack or throw objects. They are less common than traditional hauntings and most researchers believe that poltergeists are focused on female adolescents. If you go by the female adolescent theory, then you could rule out poltergeist activity regarding the bed.

A haunted object can be a piece of furniture, jewelry, any object that a person was fond of. Ghosts can attach themselves to objects, just like Danny is attached to his bed. I feel that this is more than likely the case. We have a haunted object, not a poltergeist. I imagine that there are many, if not hundreds, of haunted objects in Savannah. The next time you partake of a Haunted Savannah Tours, you should ask your guide.

Let’s Get Back to Danny

Danny didn’t just like to leave notes expressing his wishes, he was known to throw a tantrum or three. Remember the note that he left saying that was his bed? He was very angry that Jason was sleeping in his bed. One night Jason laid down and told him, “Danny, this is my bed now.” Jason turned over to go to sleep and then heard a noise. He rolled over and saw the terracotta head that had been hanging on the opposite wall hover in the air and then it was thrown right at him. Fortunately, Jason ducked. He then went and got his parents. After just a few minutes they all returned to his bedroom and Danny had completely trashed the bedroom. Lamps were knocked over. The curtains were torn from the rod. This child ghost was incredibly angry.

It was time for the bed to go. It was packed up and taken to another auction. When the bed left the house, so did the boy.

A Couple Buys the Bed

After the bed had been taken to auction, this lady convinced her husband into buying it. She had read about it in the paper and just had to have it. Boy did they end up having buyers remorse! Because the bed had already made the newspapers and had quite a reputation, customers no longer wanted to visit their store. Also, the security system would alarm several times throughout the night. The repeated alarm calls got to be too much so it is, again, time for the bed to go. Anyone see a theme here?

A very loving lady and her daughter bought the bed and it is in a room in her garage, which is now called Danny’s room. When you enter, it feels cold and damp. Neither the mom or daughter will lay down on the bed because they don’t want to upset this little boy. Is this something they knew intuitively or are they so familiar with this haunted city through its folklore and storytelling by the Ghost Tours in Savannah? Do you know what I think it is? I think they were listening with their heart.

The moral of the story is that spirits are people too. They have thoughts, memories and they have feelings and they can become attached to objects or living people. Spirits can attach themselves to any object they wish. So the next time you decide to buy an antique you just might want to make sure it doesn’t have a history….

Danny, Rest In Peace. Maybe one day you will realize that a journey into the light could be beautiful….