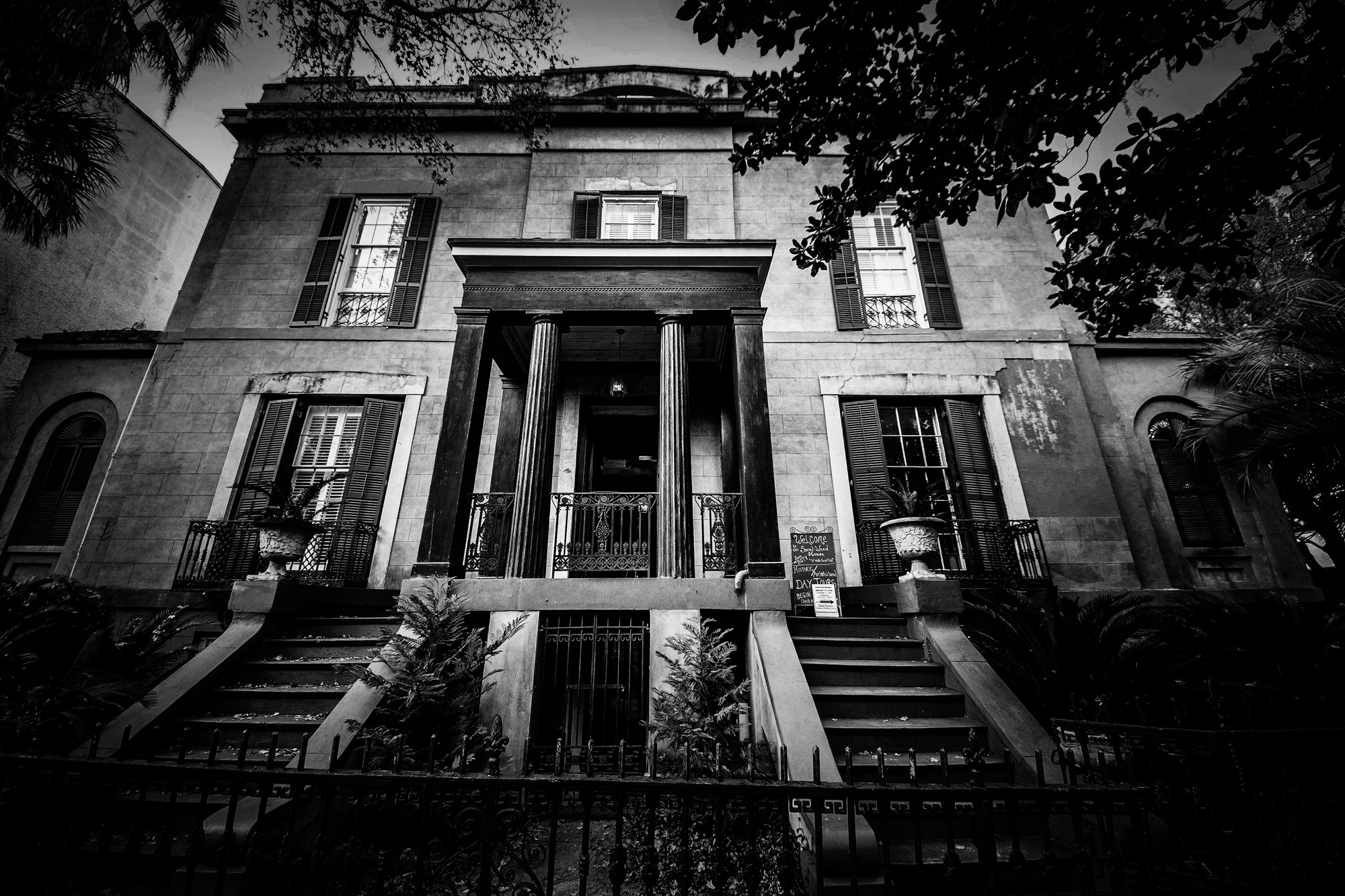 Known for its Southern charm, cobblestone streets and balmy moonlit nights, Savannah, Georgia is an ancient city by American standards. It was founded in 1733 by General James Edward Oglethorpe. Given the city’s unfortunate location and its turbulent history, perhaps it’s not surprising that Savannah is considered one of America’s most haunted cities. Today’s Savannah is chock-full of spooky graveyards, haunted squares and repurposed buildings whose walls surely have stories to tell. Visitors come from all over the world, and one of the most popular attractions in the city are the haunted Savannah Tours. There’s a tour for every kind of ghost-seeker — family-friendly, nighttime walking tour, cemetery exploration, and even pub crawls. No matter how you like to be scared, one of our ghost tours in Savannah is for you. 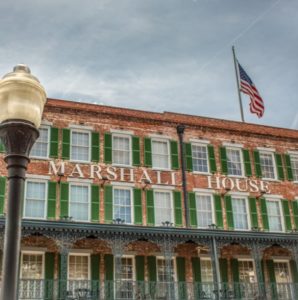 Built in 1851, the Marshall House is one of Savannah’s oldest hotels. In between providing respite for countless travelers, it was used as a hospital during both mid-nineteenth century yellow fever epidemics and for Union soldiers during the Civil War. With that much death and suffering has happened under its roof, modern reports of strange odors, moaning and the giggling of unseen children suddenly seem to make sense. The scariest place in the hotel is reportedly the night manager’s office. Guests and employees alike have experienced creepy sounds, footsteps and persistent, muffled groaning. One wonders if these paranormal reports might have something to do with the 1885 murder of W. H. Dawson, a night clerk shot in cold blood by a drunken ruffian. Is Mr. Dawson’s unsettled spirit trying to seek revenge all these years later? 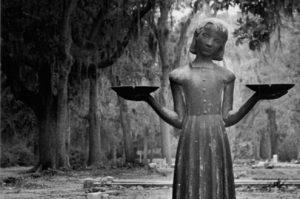 Picture, if you dare, row after row of age-worn tombstones shaded by Spanish moss-laden live oaks. The 150-year-old Bonaventure Cemetery fits the bill for everything you want in a classically spooky cemetery. Among all of the haunting statues to be found there, only the bravest souls seek out the grave of little Gracie Watson. She was the beloved six-year-old child of doting parents who nearly went mad with grief when pneumonia stole her away back in 1888. Her father commissioned a lifelike statue of the girl that still sits perched atop her grave. Some claim to have seen her tiny ghost linger about the gravesite, while others would swear that the statue itself cries tears of blood. There are Savannah Cemetery tours that are dedicated solely to exploring its haunted cemeteries, including the Laurel Grove South and the Colonial Park Cemetery. 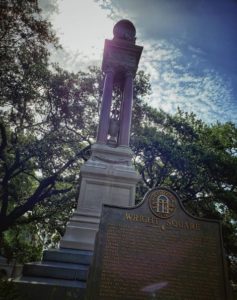 One aspect of Savannah’s unique charm is that its founder, General Oglethorpe, designed the city in a grid, creating squares originally designed for drilling his militia. These squares evolved into distinctive public areas with lovely trees and green space. Many of them were also put to a more gruesome purpose. Wright Square is one of the more infamous town squares because it was the former location of the city’s gallows. Ghost tours of Savannah should be on the lookout for the sad spirit of Alice Riley, the first woman hanged in Georgia. She and her common-law husband murdered their cruel employer and were sentenced to pay the ultimate price. But Alice was pregnant and received a brief stay — long enough to deliver her child. Sightings of a distraught young woman searching Wright Square for her infant have been reported multiple times over the years. Other squares in Savannah that may or may not be haunted include Reynolds Square, Madison Square, Lafayette Square and Calhoun Square. 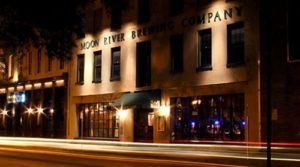 Today, on the corner of West Bay Street and Whitaker Street, is a popular local microbrewery that operates in what used to be Savannah’s first hotel. The City Hotel was built in 1821. Over the years, the hotel housed countless guests, some of whom met a less than pleasant end. Maybe they are still stirring about to this day. Employees of the brewery occupying the building report visits by Toby, a spirit who has a habit of getting physical with people he doesn’t like. Besides Toby’s unwelcome visits, workers have sworn they’ve heard footsteps and seen beer bottles moving by themselves. The upper floors of the brewery remain unrenovated, and those who dare to explore them have reported being grabbed or slapped by an invisible persecutor. Some have even claimed to see a ghostly resident they’ve named Mrs. Johnson, thought to be a former cook at the hotel who worked more than 150 years ago. Today this location is considered to be one of the spookiest spots in Savannah – the Moon River Brewery! 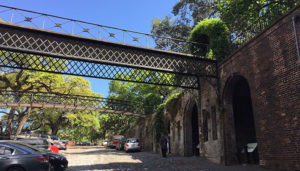 What was once the busy hub of Savannah’s cotton trade is now Factor’s Walk, a popular destination for locals and visitors alike. Located between Bay Street and River Street, these old cotton warehouses have been converted into restaurants, antique stores, and art shops. Back in the day, however, they were holding pens for slaves from Africa after they had been brutally unloaded from their ships. Upping the creepiness factor of Factor’s Walk is the network of mysterious tunnels running under these buildings, probably used for hiding the condition of their human cargo. Some visitors have reported hearing distant moans coming from alleyways and the tunnel entrances. Others have seen shadowy figures of lost women and children. Most ghost tours in Savannah are not complete without a visit to Factor’s Walk. 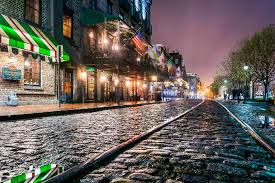 River Street runs along the Savannah River, and its history is as old as the city itself. Everything that came and left Savannah did so via River Street, including slaves. Slaves were marched through the tunnels and into warehouses, where they were kept chained in shackles until they were sold. The toll of human suffering would seem unimaginable by today’s standards. It isn’t surprising that this area of the city would be a center for supernatural experiences. Rattling chains, moaning, and desperate cries echo through the tunnels to this day. Many Savannah ghost tours stop here, and some visitors claim that not only do they experience a feeling of darkness and foreboding, but they’ve also actually seen visions of enslaved people still struggling to escape their captors. River Street is a favorite of haunted Savannah tours.

The Hampton-Lillibridge House is said to be one of Savannah’s most haunted private residences. When most people see this relatively nondescript Cape Cod, however, they are left disappointed. It looks so…ordinary. Then you hear its stories. Built in 1796, it started life as a private home but became a boarding house. One particularly troubled guest, a sailor, was known to have hung himself in one of its rooms. The home was eventually purchased in 1963 by Jim Williams who later became the notorious subject of “Midnight in the Garden of Good and Evil.” During the house’s renovation, a worker was crushed. Rumors of a curse on the property began to swirl. Later, strange artifacts were uncovered and a horrifying old crypt was discovered on the property. Whatever was inside that crypt was disturbing enough to the workers that it was promptly resealed and never discussed again. Williams claimed to hear voices, footsteps and said he felt the presence of unknown entities. People walking by the house reported seeing a mysterious bow-tied man in the window. The occurrences became so disturbing, in fact, that the house underwent an exorcism. No word if it helped.

Ready to explore more of Haunted Savannah with us?