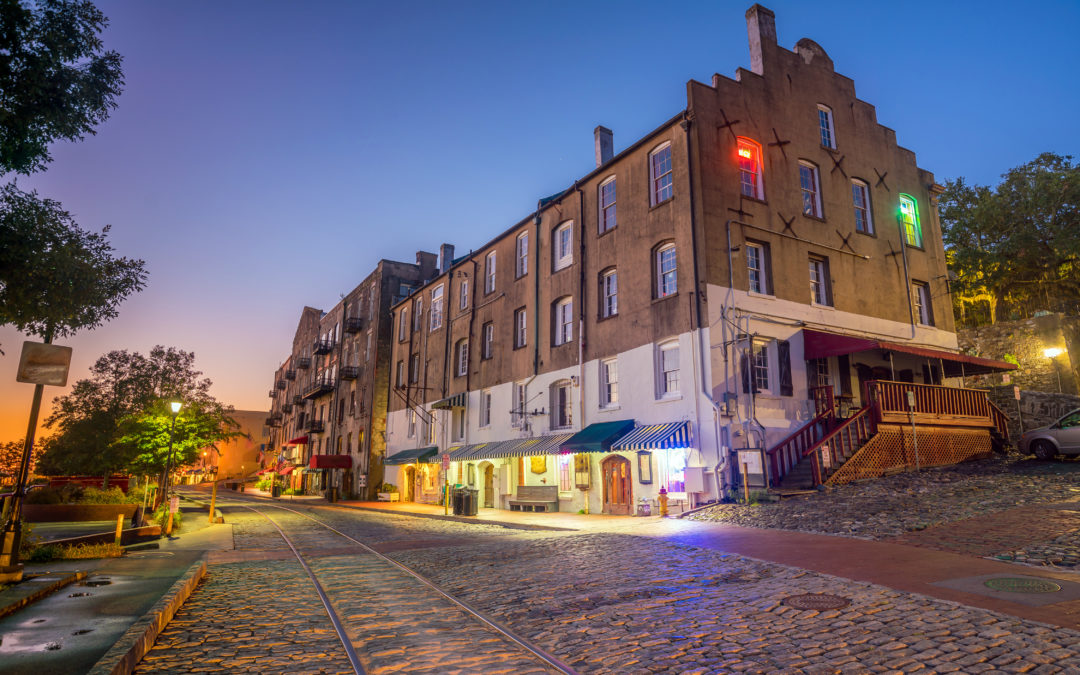 I get great questions at the end of tours sometimes: a woman on our Savannah ghost tour asked me where she could best expect to have a paranormal experience of her very own. Perhaps it was just that I was fresh off of hearing about a new, unexplainable, and undeniably creepy episode from the area, but I did not hesitate in my answer. Go down to River Street, I told her. And then I told her the story, which I’m pleased to say gave her more than just one shiver: I told her only the most recent things I had heard about the ghosts of River Street.

There are certain mystical, psychically ‘charged’ areas in historic cities that captivate the imaginations of visitors. River Street in Savannah, Georgia, is just such a location. How else to explain why the site captured the attention (in turn) of Creek and Yamacraw Native Americans, Savannah’s founder James Edward Oglethorpe, and millions of annual visitors to America’s Most Haunted City? Most of the structures now being used as retail and hotel space were originally built as warehouse spaces to hold shipped goods such as cotton. River Street is more than just a historic spot that has been converted to a shopping and dining paradise, however. It has a special convergence of history that goes far beyond merely being the spot where Savannah was founded in 1733.

There is an arcane and mysterious side of the North End, just beneath the thin tourist-oriented veneer. It’s a mere mile long if measured solely for distance, but there is more breadth of great ghost stories packed into the row of stores, restaurants, pubs, and art galleries than perhaps any other spot on the planet.

The old structures have ties to the tragic early days of Savannah’s history, and those dark stories are still being whispered by the buildings themselves, for those who are attuned to listen. In the 300 block of East River Street, there is an extremely active unseen entity that just made its presence known in an explosive way. A member of the management was cleaning a glass shelf when the entire glass piece unexpectedly blew up right in her face as if impacted by an unseen sledgehammer. When asked to clarify what had happened: did she drop something on the shelf, or jostle it in such a way where it could have experienced stress and broken? “No,” she stated firmly. “I was cleaning it with a damp cloth, and I barely touched it. It blew up so hard that there was glass in my hair and even down the back of my shirt.” She went on to say that it has not been the first incident with the shelves that she’s witnessed, but it has only happened when someone, usually herself or one of her co-workers, was near the shelf. “It’s like whatever is there wants to see people get hurt,” she said, unhappily.

She went on to tell of the ghost’s apparent delight in breaking fragile merchandise. “It likes to fling things off of the shelves. We have this captured on video surveillance, over and over. The tiles jump off of the shelves and hurl themselves to the ground at a 45-degree angle.”

A nearby jewelry shop called Cassandra’s, located at 115 E. River Street, also has an interesting video of some unexplainable ghost action, as well. On the surveillance tape, a spinner rack on the counter turns by itself. Then, mere seconds later, silver rings leap out of their display case and dash themselves to the ground, as if hurled by an unseen hand. When one of the owners was asked for her reaction, she simply shrugged as if to say: This kind of stuff happens all the time.

Is it any wonder that River Street has so many eyewitness accounts of paranormal occurrences? It is an area where the calamities which have befallen Savannah over the years begin to layer over one another, deeper and deeper, like a psychic stain that will never rinse clean. Those who are properly sensitive to such things, when visiting or even working at the riverfront area, speak of being able to see glimpses beyond the crowds of tourists into this shadowy realm, where they can see the victims of these tragic circumstances. These hinted-at phantoms are River Street’s Dark Passengers: evidence of the North End’s ties to some truly terrible happenings.